Election Detector. Shots in the leg. The main trends in the information space during September 21-27, 2020

Dobkin goes as placeholder for Kernes, 1+1 channel gives a platform to Serhiy Prytula, Shuster uses Tymoshenko as a clear agitation against the coronavirus. Election Detector 2.5.

The People’s Servant party compensates for the dubious positive of presidential PR with an unconditional negative from several old and new scandals involving representatives of the single-party parliamentary majority and the President’s Office.

The scandal in Uman, where the incumbent mayor was not allowed to run in the election and two of his “twins” were, was noticed by only two channels, although the mayor of Dnipro calls this event a huge catastrophe. Local scandals are generally of little interest to central television channels (although Inter is concerned when it affects the interests of the Opposition Platform for Life party). Oleh Liashko on Ukraine channel expresses sympathy, promotes himself and complains about his opponent.

Mykhailo Dobkin on Nash channel pathetically admits that he is forced to run for mayor of Kharkiv (and not Kyiv, as he was going to do before) so that the city would not be headed by anyone other than Kernes.

The most dramatic talk show of the week was the Pravo na Vladu [Right to Power] talk show, which was not attended by Vitaliy Klychko (although he was invited), but Serhiy Prytula had a real benefit performance.

The most important events related to the election, which were covered in the media in the period from September 21 to September 27, 2020

The student parliament of the University of Kyiv has condemned the holding of the People’s Servants congress in the higher educational facility — Servants say that everything is legal;

Results of the KIIS poll were published;

The Kernes Bloc nominated Hennadiy Kernes for mayor of Kharkiv – Mykhailo Dobkin is also suddenly running in Kharkiv, not in Kyiv;

The Minister of Health criticized the local authorities of Zaporizhzhia for the mass concert;

Beaten candidate from the European Solidarity party Volodymyr Balukh is getting better step by step;

Medvedchuk’s wife became owner of a company in Russia;;

The court arrested the property of the former “people’s servant” Oleksandr Yurchenko, however,Yurchenko himself was released on bail;;

The incumbent mayor of Uman was withdrawn from the election, and two of his “twins” were left;

The Verkhovna Rada Committee on National Security supported the establishment of a commission of inquiry into the Wagner’s militants case;

Separatist Nelia Shtepa became a candidate for mayor of Slovyansk;

Fokin proposed forming an interim government in the occupied territories, but apologized, for calling the separatists “insurgents”;

Oleksandr Omelchenko is running for mayor of Kyiv;

Maxym Stepanov plans to combine the position of the Minister of Health and the mandate of the deputy of the regional council;

The Central Election Commission approved the form and color of ballots;

Results of the poll by the Rating companyhave been published ;

Mykola Halushko, a People’s Deputy from the single-party parliamentary majority demonstratively left the party, however, the party did not see any statements;

Zelenskyi went to the front line.

Last week, Election Detector summed up the first results of the start of the official election campaign (the real one has been going on at least since the beginning of summer, if not of the year) in the information space. One of the main conclusions: the government found itself in an extremely unfavorable situation, having neither its own media nor 100% loyalty of at least one large media group. Therefore, the “people’s servants” and Zelenskyi’s team are forced to remain in defense, constantly lose public debates in foreign unfriendly territory, and reap the fruits of their indecision in the fight against Russia’s outspoken agents in the media. In particular, as evidenced by the results of our new monitoring of (pro)Russian disinformation, the tip of Russian propaganda in Ukraine is aimed personally at Zelenskyi (or “collective Zelenskyi”), who allegedly destroys state institutions and leads Ukraine to final decline and disintegration. In general, the party propaganda of the pro-Western opposition, first of all of the European Solidarity party, works in the same direction, only with a slightly different argument. And the only thing that the People’s Servant party can oppose with is the person of Zelenskyi and his personal PR. And last week, the president’s team opened a new “invisible front” against journalists, accusing unknown people of spreading Russian fakes and calling for not to believe in the comprometation in the media. This abstract and anonymous declaration is considered to be a response to the publication of Ukrayinska Pravda, in which – also with reference mainly to anonymous persons – Zelenskyi’s inner circle was accused of corruption. There were other publications, including the continuation of Liubov Velychko’s investigation into the possible reasons for the failure of the alleged operation to seize the militants of Wagner’s private military company with facts that indicate a possible connection between the head of the Office of President Andriy Yermak with Russian intelligence. No refutations or at least substantiated objections from Yermak have been heard yet – only an abstract flow of consciousness on social networks..

Last week, two people’s deputies harmed the electoral prospects of the People’s Servant party. One is Oleksandr Yurchenko, who was accused of bribery and has already been released on bail. Despite the fact that the party does not try (at least in public) to save Yurchenko from responsibility, the “servants” have to be liable for the sins of the single-party parliamentary majority member on all television channel. The second was Mykhailo Halushko, a majoritarian from Brovary, who addressed Zelenskyi with a moving speech, claiming that all seats on the People’s Servants list in the regions had been sold. The party promised to find out. Another “shot in the leg” of the People’s Servant from party from their own party members were relatives and godparents, hired as assistants contrary to promises.  The investigation of Skhemy did not resonate too much (among the central channels, it was retold only by Proporoshenko’s Channel 5), but added trump cards to the opponents of the People’s Servant party in future discussions.

Against this background, the idea of party members from Irshava in Transcarpathia, who decorated an icon with the People’s Servants logo, seems just a curiosity. However, even curiosities become good reasons to bite the ruling party. For example, in the Ukrainskyi Format [Ukrainian format] on the NewsOne channel they used a clear fake from an anonymous telegram channel that there is a wish to replace Vitold Fokin in the tripartite contact group with Mykola Tyshchenko, the People’s Deputy from the the People’s Servant party. And even on this occasion, they prepared a story about Tyshchenko, showing the audience what incompetent people the government instructs (even though, it is actually not so) to represent Ukraine in the international peace dialog.

Contrary to last year’s predictions of an almost complete renewal of the political class on the wave of the “electoral maidan”, in the largest cities of Ukraine in the mayoral election, the highest chances of victory have the current mayors (sometimes, they have served several consecutive terms) . An intrigue suddenly emerged in Kharkiv: Mykhailo Dobkin, who has been entertaining Kyivans with creative advertising on a motorcycle since the summer, suddenly decided to run for mayor. In an interview  with the Nash channel, Dobkin made it clear that he was running as a placeholder for Hennadiy Kernes, who is being treated for coronavirus in Germany. And only in case if Kernes’s recovery, which is already reported by his team, will be delayed.

In Vinnytsia, where Volodymyr Hroisman’s protégé Serhiy Morhunov has every chance of being re-elected, the Opposition Platform for Life decided this week to show a “new face” by introducing its candidate for mayor boxer Vyacheslav Uzelkov. But using this occasion, they showed a very specific “old” face: together with party leader Yuriy Boyko, Uzelkov was presented by former Party of Regions member Volodymyr Prodyvus, a direct participant in the gunfire exchange for amber in Volyn. Another scandalous coverage opportunity related to the Opposition Party – For Life has arisen in Kramatorsk, where the nineteen-year-old son of People’s Deputy Natalia Korolevska is running for the city council. Rostislav Solod, as it turns out, has a team that has been thinking for several months how to make Kramatorsk attractive.

The problem, which goes beyond the interests of a single political force and can affect (actually, has already affected) many is “twins”. This week in Odessa, there appeared “Filimonovs”, “Trukhanovs” and even “Volodymyr Zelenskyi”, in Cherkasy appeared “Bondarenkos”, and in Uman two “Tsebriys” were registered instead of one real incumbent mayor, and this is not the end.

Nelya Shtepa, this already forgotten name, has appeared in the information space as a symbol of pro-Russian revenge. On September 23, when Shtepa was registered as a candidate for mayor of Slovyansk, Channel 5 and STB reminded about the former mayor, who had not been punished for supporting separatists, and on September 25, her participation in the election was included in the election incidents review on 1+1 channel. How did it happen that both Shtepa and her two main rivals, who also supported the separatists during the occupation of Slovyansk, plan to spend the next few years not behind bars, but in the mayor’s chair, the question is (for some reason) rhetorical.

Among the pleasant events are the following: useful news stories about the election began to appear in the news of some TV channels. In particular UA: Pershyi made a material about the training course on the CEC website, ICTV made an explanatory story about how the voting will take place. The Public broadcaster also dedicated a material to violations of the agitation conditions in Prykarpattia, recorded by Opora observers. Ukraine television channel also spoke about violations, providing, however, a strange example from parliamentary (!) elections in 210th electoral district, where Borys Prykhodko won the election in court. The relevance of this example was not explained to the audience.

The past week has been relatively poor in pseudo-sociology in the media. However, we manged to record one example on the central channels; 1+1 in the Pravo na Vladu [Right to Power] program voiced dubious results of the survey of no less dubious Image Control company. Although Vitaliy Klychko was recognized as the leader with 37.6% of the vote, Iryna Vereshchuk was in second place with 13.3%, followed by Andriy Palchevsky (6.4%), Oleksiy Kucherenko (6.1%) and Serhiy Prytula (5.3 %). If we compare these with the numbers by a real sociological company – Rating – for the same period, we will see a completely different picture: Klychko (43.6%), Prytula (9.8%), Vereshchuk (6.9%), Palchevsky (6.4%), Popov (5.8%). 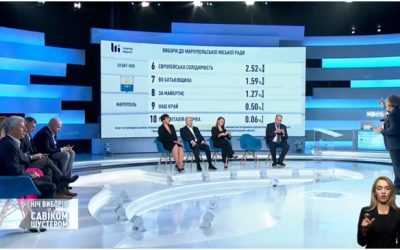 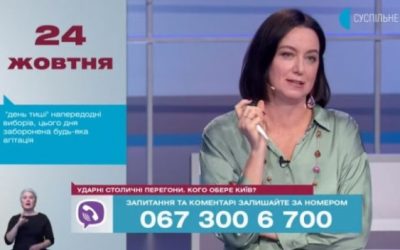 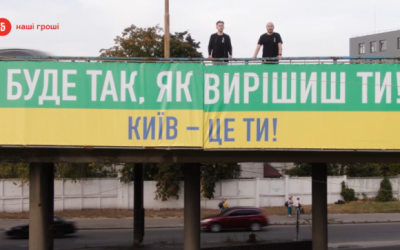 Election Detector. «I want only to ask.» The main trends in the information space during October 12–18, 2020