A boomerang and a torpedo. The main trends in the information space during May 27 — June 2, 2019. Election Detector 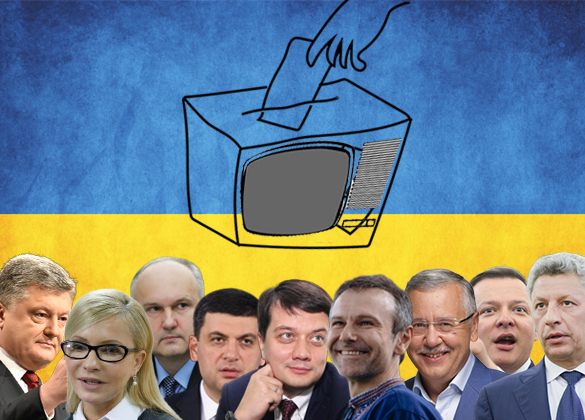 Political forces are regrouping behind the scenes, while attention is focused on Saakashvili.

The informational and political disorder of the last few weeks remains the same: the borderline between personal opinion of people indirectly involved in politics and the politicians themselves has been erased. Personal advice to declare default, which Ihor Kolomoiskyi had given Zelenskyi and his team, became the main topic for discussion in talks shows, where the refusal to repay debts was considered as a realistic prospect. However, Zelenskyi’s team (where random newly appointed officials continue to speak for their boss) does not support the idea of default. Statement made by Borys Shefir, Zelenskyi’s business partner and friend who is the co-founder of Quarter 95, in an interview with Detector Media was interpreted as a declaration of the new team’s language, cultural, and international policy, although the team denied this. “Shefir voices what Zelenskyi thinks,” the talk show commented on this. If official communications are not set up, and if Zelenskyi does not limit the number of mandates for expressing the position of “Zelenskyi’s team”, not only will the mediaexperience problems, but also the authorities themselves.

The lack of specifics in the answers to journalists’, experts’, and opponents’ questions during discussions on the list of candidates is a common practice for practically all political forces and politicians. Leaders and representatives of the parties promise “new faces”, “patriots”, “responsible people” and so on, but diligently avoid mentioning specific surnames. The same applies to potential alliances in the future Verkhovna Rada: both the authorities and the opposition prefer not to talk about who they are ready to co-operate with. For example, to a direct question whether the People’s Servant party will cooperate with the pro-Russian parties in the Verkhovna Rada, the leader of the political force, Dmytro Razumkov, responds something like “we will be together with the people.”

But it is obvious that the talks are under way. Their somewhat provocative echo could be seen this week in the studio of the Ukrainian Format program at NewsOne, where Nestor Shufrych, representative of the Opposition Platform – For Life, offered Lyashko’s former colleague Ihor Mosiychuk and other politicians to join forces, “so that Kononenko would not get into the parliament.” On Inter, Yuriy Boyko announced the reunion of the former “Opposition Bloc” (in fact, the media have already written about this during the week, but the politicians themselves abstain from commenting on this), “because the people want this”. On the contrary, “1+1” said that the Kremlin is sponsoring the reunion of the “Opposition Bloc”, and that this is done “for the sake of profit”.

There is nothing even close to balance in the coverage of election intentions and actions of political forces on television. The main principle is to “support friendly forces”. For example, “Inter” devoted an entire episode to the fact that people’s deputy Serhiy Kaplin had left “Petro Poroshenko Bloc”, even though Kaplin himself said that this had actually happened three years ago. Even after the failure with a conversation about Hroisman’s resignation, “Ukraine” invited their regular speaker Oleh Lyashko to the studio. “1+1” was trying to depict Zelenskyi as a fighter who had endured “a battle for tariffs at the meeting of the National Security and Defense Council.” Against this background, only ZIK channel stood out, having made a detailed and neutral inventory of political forces, candidates, ambitions, and alliances in their weekly talk show “Pershi pro holovne. Detali”[“Being the First to Talk About the Main Things. Details”].

Viktor Medvedchuk has become increasingly openly pro-Russian on his media platforms. In particular, he was criticizing the Ukrainian authorities for being in litigation with Russia with regard to ships and sailors trapped near the Kerch Bridge. He has also been repeating that “75% of Ukrainians want direct talks with Russia,” even though sociologists call the very formulation of question in this poll manipulative.

The most important events related to the election, which were covered in the media in the period from May 27 to June 2

The Supreme Court refused to consider the decree on the dissolution of parliament.

The President called on the Verkhovna Rada not to “engage in promotional activities”, but to work on reforms.

Dmytro Razumkov became the head of the People’s Servant party.

Zelenskyi expanded the personnel structure of the Presidential Administration.

During the convention of the “Trust Actions” party, the National Corps tumbled a monument to Zhukov.

The “Opposition Bloc” is preparing for a reunion.

The Central Election Commission cancelled the requirement for the submission of certificates when changing the place of voting.

Zelenskyi took part in the concert of the “League of Laughter”.

The “European Solidarity” party was headed by Petro Poroshenko.

Avakov said that he does not plan to run for a member of the Verkhovna Rada.

The Verkhovna Rada did not support Hroisman’s resignation.

Deputies want to dismiss Andriy Sadovyi from the position of a city mayor of Lviv.

Ihor Kolomoiskyi said that he would help the “Fatherland” faction in the parliamentary election.

The actor from “Quarter 95” is planning to take part in the election.

The president submitted a bill on impeachment to the Verkhovna Rada.

The Verkhovna Rada appointed the eighth member of the National Council on Television and Radio Broadcasting.

The People’s Servant party announced the recruitment of candidates for the majority vote.

“1+1” host Oleksandr Dubinskyi intends to run for a member of the Verkhovna Rada.

The People’s Servant party hopes to form a coalition on their own.

Zelenskyi visited the front line in the Luhansk region.

Zelenskyi approved the new members of the National Security and Defense Council of Ukraine.

Danyliuk stated that servers with secret information had disappeared from the Presidential Administration — criminal proceedings were initiated.

Zelenskyi came to Lviv to visit the mine where miners had died.

Trukhanov and Kernes created a “party of mayors”.

Oleksiy Honcharuk from the “People’s Power” became deputy head of the Presidential Administration.

Andriy Portnov filed another complaint against Poroshenko to the State Bureau of Investigations.

The Central Election Commission may have problems due to the lack of time to print ballots.

Deputy head of the Presidential Administration Kyrylo Tymoshenko transferred his business to the management.

Election Detector. How to stop loving Palchevskyi. The main trends in the information space during October 19–24, 2020

Election Detector. «I want only to ask.» The main trends in the information space during October 12–18, 2020